I would just like to say that if you have ever in your entire life been able to comfortably wear a Bikini, than you should thank your lucky stars, or your parents for blessing you with such genetics. For some of us a Bikini will never ever happen. I have long since forgotten any day-dream of ever wearing a bikini, or any suit that made me look in some way descent. Nope, the ultimate goal in a swimsuit is FUNCTION + Whatever looks the least ugly. I’m not even saying it makes me look good, just not horrific.

Now I could get all sorts of dramatic and stress all the reasons why I look bad in a bathing suit, but I’ll save you from the 10 page list. Even after losing 75lbs, I’m gonna go out on a branch here and say I might actually look worse than before. Now my skin is lose and unpleasant to look at…ha! Especially the thighs, which is the area my body has apparently decided is the best place to store fat. I’m still working on accepting my legs.

I mentioned a month or so ago that Ms. G gave me a swimsuit…with a skirt. Part of me (since I was a little girl and would go Hot Tubbing with my Grandma) has always wanted to wear a skirted swimsuit. The other part of me realized that it’s about as Grandma-y as it gets. This year, I could give a shit. I’m SOOOOO over trying to look cute or hip or cool, now I’m dressing simply because I like it, and hopefully because its flattering.

Which brings me to the floral skirted swimsuit Ms. G gave me. Pretty much its the most comfortable suit I have ever owned! Seriously people. I actually walked from her house to the pool wearing nothing but my swimsuit, that’s how nice I feel in it. The only complaint I have ever had is that the print isn’t really my style. Its big pink roses on a black background. By no means is it the worst thing I have ever seen, just not particularly trendy. So anyway Mr. Gaunt and I were at Marshals the other night and I happened to be browsing the skirted swimsuit section (ha, I sound like a loser now) and found a pretty darn cute suit (with a skirt) for $40.

Tried it on and bought it! I’m very pleased with this suit, it has a cute Tennis dress feel. I will be bringing both suits to Washington in two weeks (from today) and will wear my skirts proudly…lol! 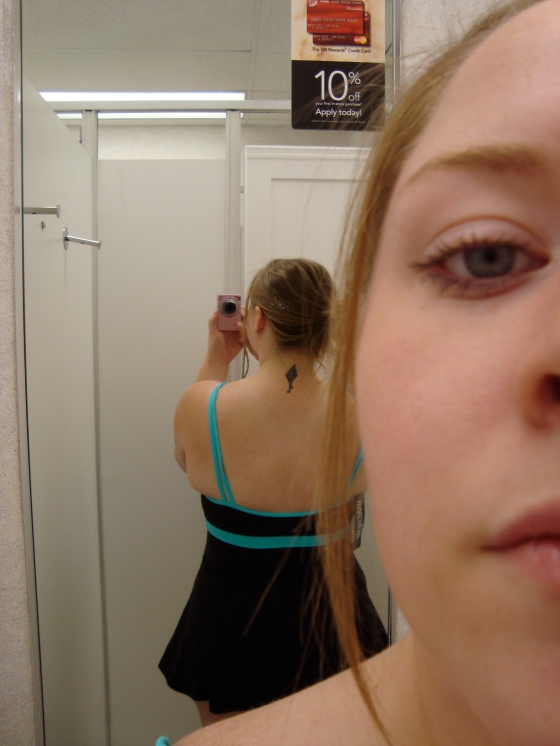 My friend Jama posted these on her (private) blog, and they looked so good! I also had pretty much all the ingredients needed, so I whipped them in this evening. Jama is a Clean Vegan, which I am very interested in. She doesn’t eat fake things like Vegan Mayo, Seitan, Soy Burgers. Basically just naturally occurring foods. Soy in generall weirds me out, which is a big reason I still eat meat, I don’t want to do soy. I have recently thought about ditching cheese though, and trying to cut back on the meat…shhh…dont tell Mr. Gaunt.

I also feel like I’m going to remove eating out all but one day a week. Nothing good comes from a restaurant (including no blog posts from me…lol!) And produce season is coming, and I’m jumping back on the veggie/cooking bandwagon! Oh and the pool opens in TWO WEEKS!!!!!!!!!!!!!! Oh speaking of Pools, I have officially decided to rock a bathing suit with a skirt this summer. Ms. G gave me one, and it is totally dated and grandma-like, and I LOVE IT! It covers the thighs and accentuates the waist. I might even take a full body shot of it for yah…lol! Basically I decided that I love to swim, and I don’t give a shit if my suit is a littleold school looking, obviously people can see I’m still young, and Id rather have a flattering grandma suit than a not cute modern suit. So that is that!

Oh I was talking about muffins…lol. Yeah so I pretty much made it like the recipe said, except I didn’t have ground Flaxseed, only whole flaxseed, so I used that. Also I didn’t have any Bran, so I did a 1/4 cup of oats. Last and most important, I used Whole Wheat Flour instead of regular flour. This brought a whole new discussion that I will talk about at the end of this post. For now here is the original recipe:

Spoon batter into prepared muffin tin. Add a teas of jam to the top of each and bake in the oven for 2o minutes. YUM!!

Jama’s looked all light and fluffy and yummy, mine…well…not so much. I blame two things on this. 1. The altitude here SUCKS for baking, Jama lives in California.  2. The Whole Wheat Flour:

See I said a while ago that I planed on replacing everything with Whole Wheat Flour, because it is healthier for you. So far I havent had a big problem with, but I wouldn’t say it really works the same as All Purpose Flour. See WW flour is so much heartier. It gives things a totally nutty-hearty flavor, basically it TASTES like health food. Also it doesn’t rise as well (avoid using in things that need to be light and fluffy: Cakes, Pie Crusts, Pastries) and it definitely is darker in color. Personally I found a liking to it. I like that it taste more substantial and more nutritional. However Its not for everyone. Mr. Gaunt likes it ok, or at least he pretends to. I think I may actually buy some AP Flour for baking too though.

I would make these again though, they are more like a hearty breakfast muffin than like cake or a treat. I think they will be yummy with a banana in the morning, or some Earth Balance Spread on it. I would defiantly tell people to make these.

For real people! Do you know what happens when you swim all summer long????? Your swimsuit DIES! Well I guess if you have some amazing bionic (100% polyester) suit it wont, but mine did. And how does a swimsuit die you might ask? Well it becomes completely SEE THROUGH! And let me just tell you that nobody wants to see that! Ok maybe Mr. Gaunt does, but no one else! 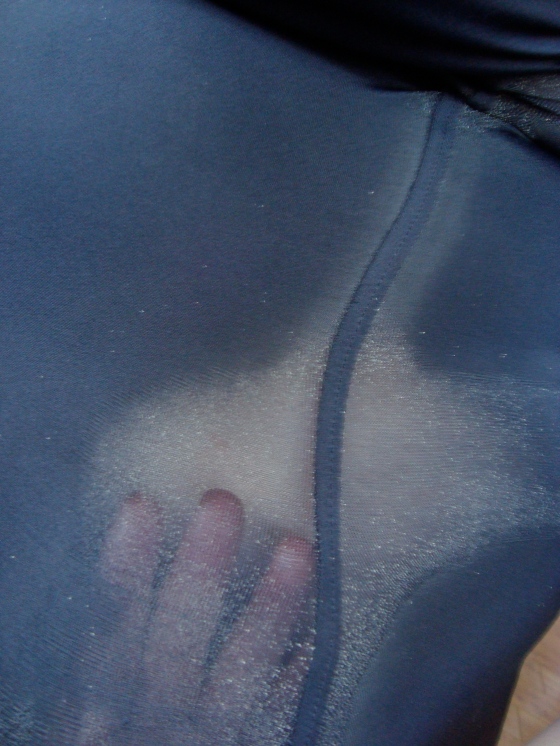 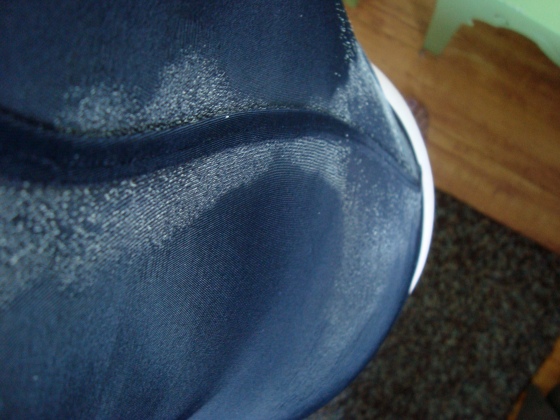 Yeah WOAH nelly that’s my hand you can see right through the BUTT of my suit…ahhh! Anyways there are still a few weeks left of pool time that I don’t want to miss out on, so I hit up Sears today to see if I could find a nice basic one piece suit. Im picky about my swimsuits in that they need to cover as much of my body as possible! Although I pass on skirts, and tankinis are always too short and still show my belly button (ewww) I also cant do halters because my torso is a we bit long so I end up with MAJOR cleavage (ewww) so yeah that leaves a nice solid one piece. Simple enough? Nope! Sears only had ONE left so I tried it on, and although its a smidge tight I actually kind of liked it. At this point in time cuteness of a suit holds little importance to me so ignore the grandma fabric. Here she is…(no you don’t get a full body shot!) 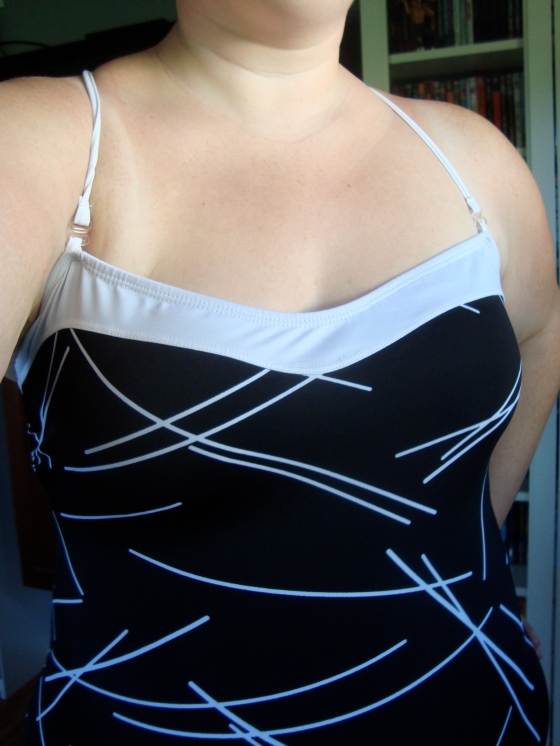