Last year I planted Swiss Chard in the early spring (like they tell you to). I’m obviously no master gardener, so when September rolled around and my Swiss Chard was still tiny, I assumed I just did it wrong. When we did our fall clean out of the garden, I chose to leave the Swiss Chard, as it still looked like it was growing. When the plant sprouted seeds, I cut them off.  Shockingly it made it all the way through the winter (despite articles I read about frost killing it), and about a month ago it began growing like a weed! How cool. I don’t know if this is common, I couldn’t find any articles that said this was normal, but who knows. Washington is so mild in its seasons, and the soil is so moist and rich that things seem to just love to grow here.

Tonight for dinner Mr. Gaunt grilled turkey burgers and I made french fries and our first batch of Swiss Chard. I sauteed it using this recipe, and it was delish, Mr. Gaunt even liked it. I’m excited to eat a lot more Swish Chard, as there are a ton of recipes out there for using it. Anyone have any favorite recipes? Ive made lasagna with it, but nothing else. 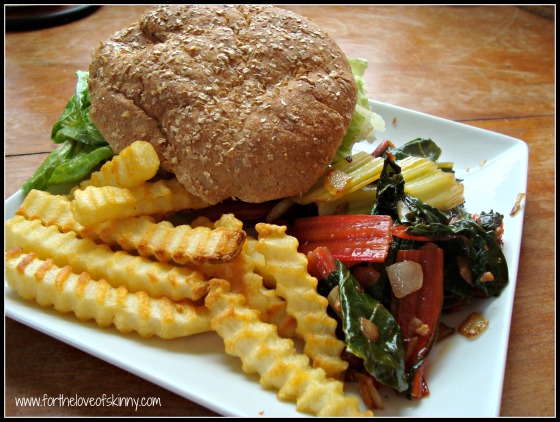 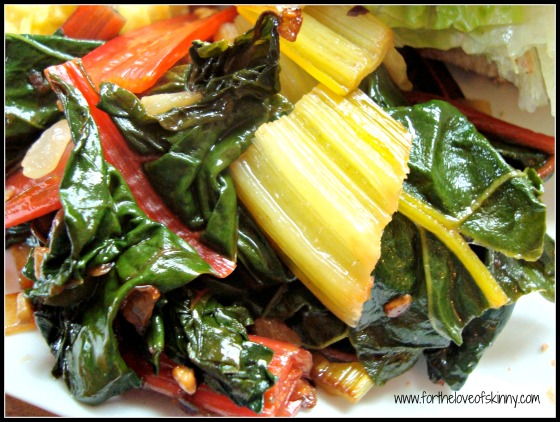 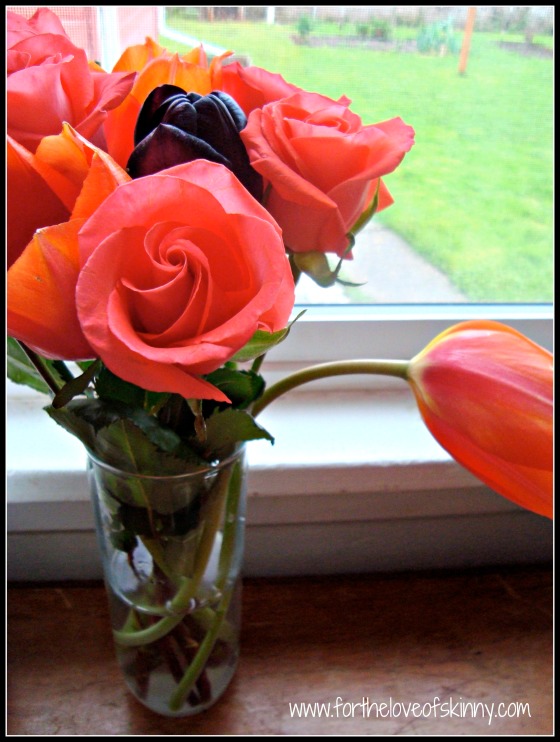 Roses from Mr. Gaunt. Tulips from my mom.

Tuesdays are our eat early nights. Although there is something weirdly nice about eating dinner at 5pm. It just sort of gets that task out of the way, and reduces the likelihood of it getting “too late, and too tired” to make anything. Resulting in eating garbage.  I wish I could convince myself everyday to just come home, straighten my house and make dinner. I’m working on it. So Tuesdays I have yoga and Mr. Gaunt has class at 6:30, so we eat early.

Using what we had on hand I went for easy and classic. The chicken is just breaded with Italian bread crumbs, and the Black Beans and Rice is a boxed thing. The Asparagus though was done Mr. Gaunt’s favorite way, with balsamic!

It’s nothing fancy, just trim, throw on a cookie sheet. Drizzle with olive oi, balsamic, and salt and pepper. Bake for 10-15 minutes on 345. Comes out a little crisp on the edges and very tangy.

The last couple weeks I’ve been working 9 hour shifts at work to help train new season employees. It’s definitely challenging, but more entertaining than my previous task of doing NOTHING! Our busy season has just started, so the hours may get longer and longer. I need to stay on top of my working out and not use long work days as and excuse to be lazy. I’m continuing to go to the gym right after work at least 3-4 days a week, plus yoga on Tuesdays. Recently I read a post from Emily Martin (The Black Apple) about a great online workout video series that I have decided to try! They are short, like 12 minutes and super intense I guess. Has anyone tried these? 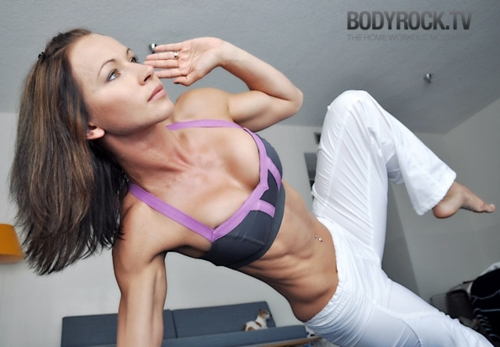 I originally saw this idea on Meghann’s Blog, and it looked really good! I love almost anything roasted, I love the crisp edges and how savory it always is….yum! Cabbage however, is not something I ever thought about roasting. I’ve eaten cabbage raw, and sauteed, and boiled, but never roasted, such a great idea. Mr. Guant also loves cabbage, so it was a win win.

I planned this for tonight because I have Yoga on Tuesdays, and I HATE being too full. We usually eat dinner around 6pm (mind you we work at 5 and 6am respectively) but on Tuesdays Mr. Gaunt has his biology class at 6:30 and I have Yoga at 6:45. I’ve made the mistake of eating too much too close to yoga, and I feel GROSS. So I figured a cabbage dinner would be perfect for tonight.

To prep the cabbage I peeled the outer layers (the yucky ones) sliced it thin (maybe an inch) and drizzled it with olive oil, balsamic, salt n pepper and some generic spices.  Then I roasted them at 400 for about 30 minutes, just watch em for brown edges.

I topped the slices with a red pepper spread I had on hand (although marinara, caprese, bruschetta, anything would do) and topped with a turkey burger patty and shredded Parmesan. You could also top it with a veggie patty, to make it vegetarian.

I’m looking forward to yoga tonight. It’s not fancy yoga, just the free yoga at my gym, but I really like it. It aligns me for the week, helps me stretch and calm. I would really like to maybe go to a real yoga studio some time, but at $15 a class, I will continue to stick it out at my gym.

Oh the battle continues. If nothing else, at least I haven’t gained MORE than 25 pounds. not that a 25 pound gain isn’t substantial, because trust me, my pants tell me it is. Buuut after I gained 25 pounds a year ago, I have managed to go down 12 pounds (at my wedding) and then back up 12 pounds, but no higher.  Which means there are a few pairs of pants that I can no longer wear (which were my fitted pants at my smallest) but other than that, I haven’t really had to buy a new “fatter” wardrobe. However today I ripped some linen pants (truth be told I wore them to the threads last summer) but needless to say they felt a smidge tighter this year, and sure enough the threads gave way and ripped. Ugg….so fat. Which also puts me at ZERO capris (homie doesn’t wear shorts…eww) for this summer. Speaking of Capri’s, I’m feeling like I don’t even know what Capri trends are this year. Who can clue me in? Is it skinnies? Linen? Boyfriend? I’ll have to look this up. As you can tell I have not stepped foot in a  mall this season.

Moving on from Capris, I’m still (and let’s get real here folks, as long as there are cupcakes and potato chips on this earth, always will be) on a mission to lose 25 pounds. The weather is nicer, and I’m spending more time in my yard, and less time on the couch. Mr. Gaunt and I have stocked the fridge with healthy food tonight, including bottled water (which I know is bad, blah blah, but its the only way I drink water). My hope is to get back on track with cooking!!! My family really really likes to eat out, and there are tons of great restaurants in Bellingham, BUT it’s so easy to make it a habit. Therefore we are going to really try to only eat out on the weekends. All of this in attempts to just get a little more in shape for summer. 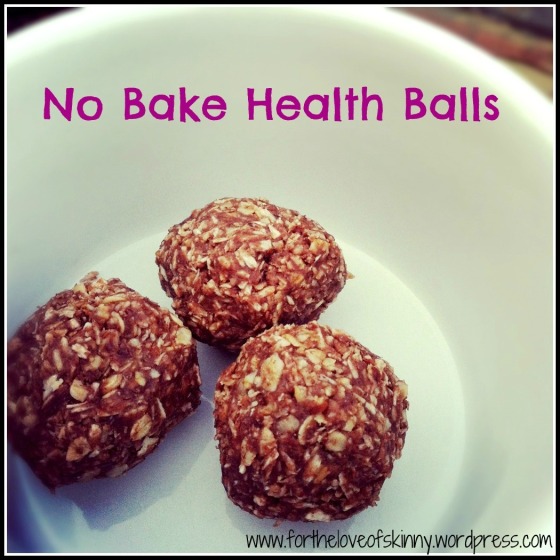 Tonight I searched “Healthy baking” on Pinterest, and got some great ideas for snacks. First up I made these NO BAKE ENERGY BALLS. I made a couple of substitutions, being no chocolate chips (that just makes them candy in my house) I also did flax meal (is that the same as ground flax seed?) and I did Apple infused Honey, because I found it on sale at the BGO.  All the ingredients (besides the honey) I actually had on hand too! These are pretty yummy, in a granola bar/oatmeal cookie sort of way. Although not so amazing I will eat them all in one sitting. Which is pretty much the key to all food in my house.

I also whipped up some of these Zucchini Parmesan bites, which actually ARE amazing, so I might eat all of them before I have time to take a photo tomorrow. We will see. I felt really proud of myself because I actually used frozen shredded Zucchini from last summer! Go me!

Last but not least, I’m really trying to do some interesting things with my hair. Pinterest is just riddled with adorable do’s, I really shouldn’t be so hair-lazy.

Also in BARGAIN SHOPPING NEWS: Guess who found (not expired) Aveno Spray Waterproof Sunscreen for $1.99 a bottle at the BGO today! THIS GIRL! That is such a good deal on spray sunscreen! I stocked up too, we are pale folks.

On Sunday Mr. Gaunt and I tended to our (MUCH) neglected garden. I wont lie, with the hub of wedding and work and schedules and dieting, the garden was the first thing we let go. I’m still processing how I feel about the garden. Next year I wont do quite as big, but I will plan more for what I want to grow (NO LETTUCE!). So Sunday we trimmed things up and picked the ripe tomatoes (sauce will be canned tonight) the acorn squash, a few jalapeno, Zucchini and Cucumbers too.

I bought a beef roast for the Crockpot too. I cut up an onion, a few leftover potatoes from the wedding, a baby acorn squash and threw them in the crockpot and in the fridge. Then in the  morning I got up early and threw the roast in whole, with 2 cups of water and seasoning packet. Set the cooker to low and left for work. 8 hours later the house smelled amazing and dinner was done. Me and the crockpot are going to be good friends this winter. Oh and Pear Cider is the Beer Haters best friend!

My shoulders are totally sore from doing yesterdays little workout. I actually really love these, how they target different muscle groups. My friend Mallory brought me a whole set of dumbbells and they have been perfect for these workouts. These also only take like 10 minutes, but every day I can feel that they are working. I just wait an hour or so after my walk and do these while watching tv. So easy. I’m excited that todays are legs/butt, because I REALLY need help in that area.

My weight is still around the same place as yesterday. I had two large glasses of Wine/Mead last night, so I’m happy there was no real gain. I gotta think of a real calorie burning activity for Mr. Gaunt and I to do this weekend. Suggestions?

Last night I made this Brussel Sprout recipe and it was pretty good. I mean Mr. Gaunt use to say he hated Brussel sprouts, now he eats a meal mostly consisting of them, love it!

I don’t know much about Tumblr, but there are some pretty SWEET workout/weightloss blogs on there. Here are two that you can wast some time with: