All our cards have been sent out, so I can now share our 2012 Christmas card…

Cute right? There were a lot of fun out takes too, two of which we used on the actual card… 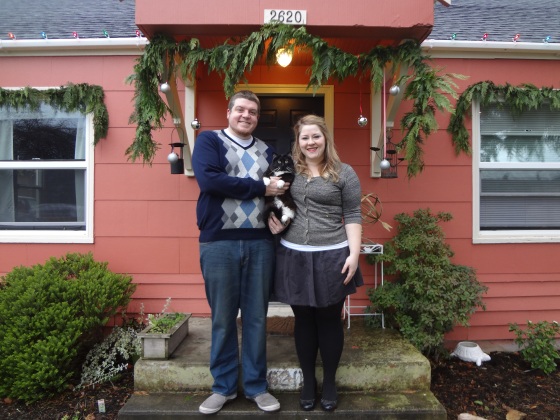 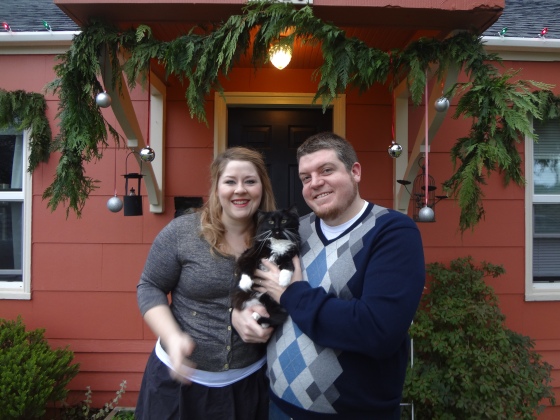 What can I say, sometimes when you insist on having your cat in your photo you have to take a million shots. And in case you wondered we set our camera up on a ladder in front of our house, because A. We don’t own a tripod, and B. Its a little digital camera that wont screw onto a big tripod. The ladder worked fine.  See 2011 Card here, and 2010 card here.

In other fun Christmas news, Mr. Gaunt played Santa at my work. Kids came and decorated cookies with me (Mrs. Claus) and then they took photos with Santa and he read them The Night Before Christmas. First off, let me say that I was super nervous for him. I mean what if the kids didn’t believe it was him, what if the parents thought he looked too young? Could he Ho Ho Ho properly? Mr. Gaunt was less nervous than me, he really just isn’t one to stress over stuff like that. So we watched some YouTube videos on How To Be A Good Santa, practiced the Ho Ho Ho, which is more of a laugh than the actual words, and studied up on some Santa facts. Know all the reindeer by heart! 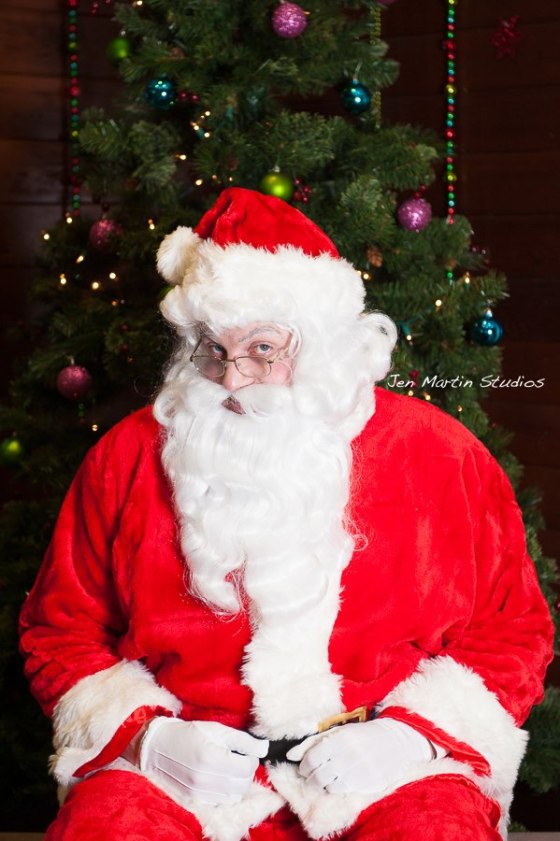 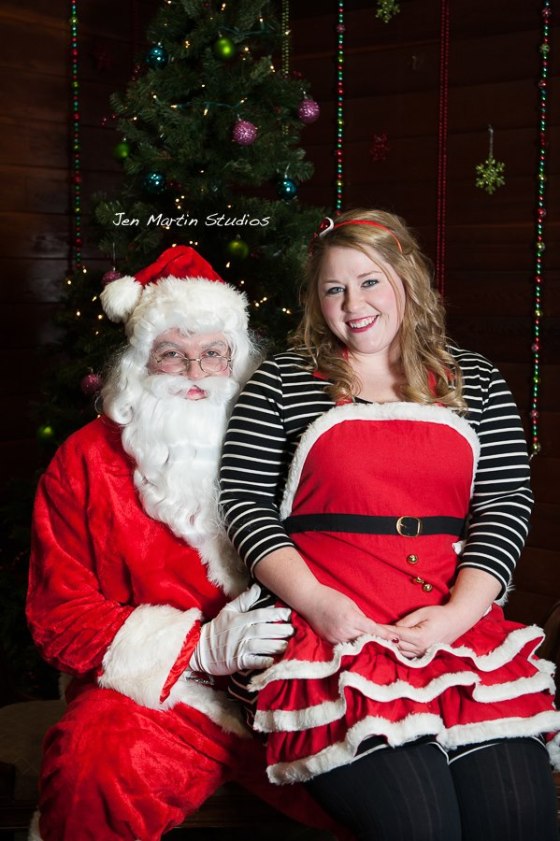 The day of, we went to my work, put on the costumes, put on lots of makeup (even Santa got rosy cheeks and a little lipstick for jolly-ness) and waited for the kids. In the end, it was the cutest thing I have ever witnessed. Mr. Gaunt is such a kind and funny personality. He got down to their level, looked them in the eyes, asked them questions about Christmas, and their families, and kitties, and snow. He let them sit next to him, or on his lap. He thanked them for cookies, and told him which kind were his favorite for Christmas eve night (chocolate chip). 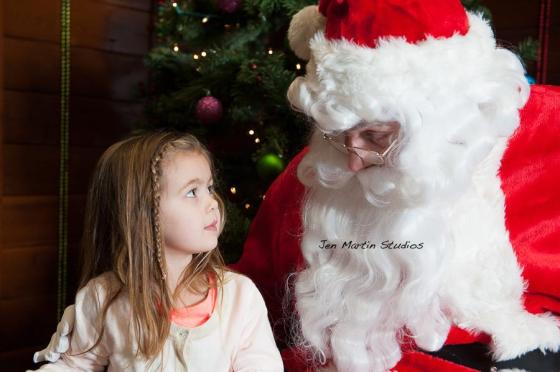 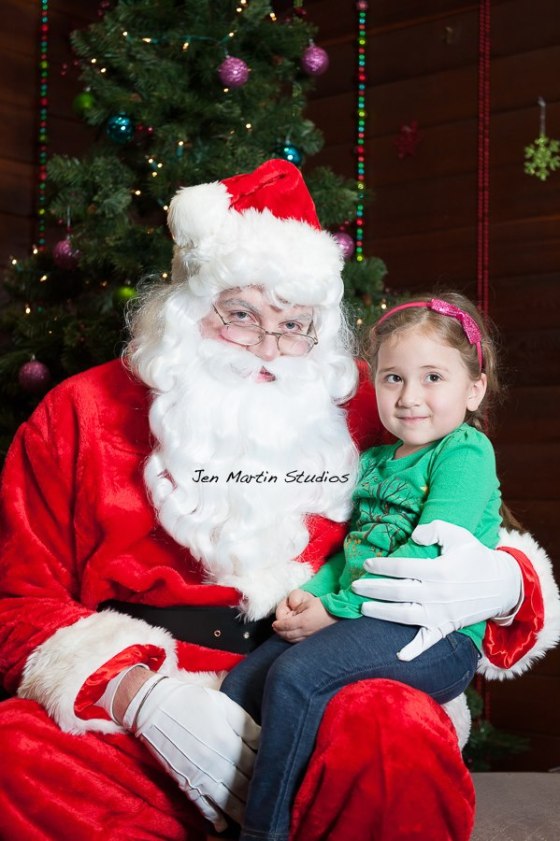 I nearly burst into tears watching him be so sweet to these children. I honestly could not have married a better man, and holy shit he will be the worlds greatest dad…period. No one will compare. I love him so! (sorry to gush!) (see all photos here, note that half way through that album it becomes a different Santa, not Mr. Gaunt)

In an honest moment, I will say that the photos of myself made me feel extra fat. Maybe it was the red, or the stripes, or the fat, who knows? Its both nice and sad to have a reminder to stop eating cookies and go work out. Maybe in the new year Ill get my ass back in shape? We really need to invest in our own Santa costume too, obviously.

Also all photos were taken by Jen Owen of Jen Martin Studios. She did our engagement photos back in the day, but is such a genius with kids! So precious! She also does birth photos if anyone is looking for someone.

In an effort to improve my mental health and be more like my wonderful Husband, who is always happy and always looking on the bright side, I’m going to spend some time being more thankful and appreciative.

This is something that I have struggled with for years, seeing the Good and not the Bad. I know where it comes from, I understand the situations in my life that have given me a pessimistic or un-trusting look on life, but I would like to change it. It’s hard though. I do think that I am more responsible because of “worry about the worst” kind of thoughts, but I also spend a lot of time un able to let things go. I want to be more kind, happy, proud, respectful, without feeling like I’m being “fake” or ignoring things that are important. That is where I struggle. How can you see the good without ignoring danger signs. How can you be thankful without being walked on. How can you let go of anger and judgements but stay true to your standards?

I know that hatred and self-doubt have ruined relationships, and many experiences in my life. It’s not a feeling I want to bring with me into the future, or teach to my children. I picked Mr. Gaunt as my partner because he embodies all the good in the world. He radiates joy and kindness. He sees the good in everyone, and he returns it. Yes he has weaknesses in responsibility sometimes, areas where his “It’s All Good” mindset can sometimes get him in trouble, but he is genuinely happy. I know I will always need to be a little more “on top of my game” than he is, I need to keep things running in a functioning manner, but I also need to relax. I want to take on his eternal joy and excitement in life.

Now this of course is all very hard for me. It’s not in my nature, and I respond pretty negatively to criticism from others. I’m fully aware that there are people out there who are nodding their heads in agreement, but I’m not quite ready for criticism or advice. This is going to be a slow process of identifying my feelings, my triggers, my fears, my actions and working to change them.

1. Things that are SO NI About Others:

-My Brother living with us helped immensely in paying for our wedding!

-My sister is going to take her hair certification test on Wednesday, and rock it!

-My Best friends Mallory and I sat and talked for like 6 hours on Saturday night.

-Jenny and Justin picked us to be Cecilia’s God Parents, we will Baptize her over Thanksgiving in Colorado!

-Our friend Drew ran a marathon yesterday, this is so inspiring.

-Mr. Gaunt understands the importance of us switching banks. We will finish our switch to the Credit Union this week.

2. Fears that are No NI that I’m Letting go of today:

-That we have too much stuff (really we are overly blessed, and are still cleaning up from a wedding)

-That my job is boring (but I’m blogging and listening to NPR, so that’s cool)

I would also like to try to keep a positive attitude today about house work (laundry, dishes, cooking) and about my painting business! Both of which will be great as long as I get a little done every day without stress or anger or yelling.

My sister Taylor is currently attending TONI&GUY Hair Academy. Shes kind of awesome at it. If your in Bellingham you should call up and get a good inexpensive hair (cut,color,etc) from her! We just make her come over to our living room and bride her with Oatmeal cookies.

I love nothing more than a man with a new haircut! Mr. Gaunt will never go bald…swoon. 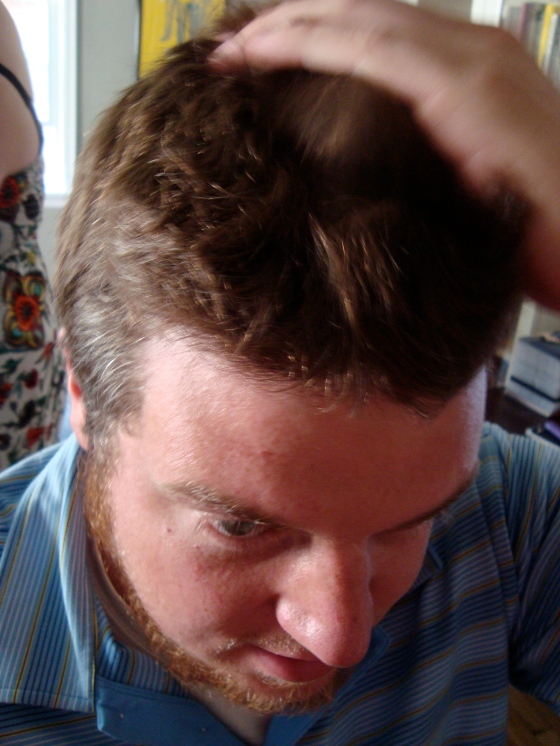 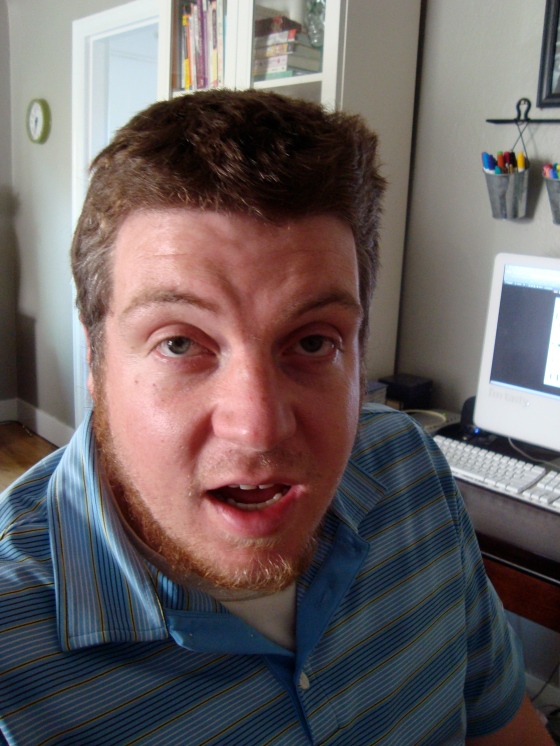 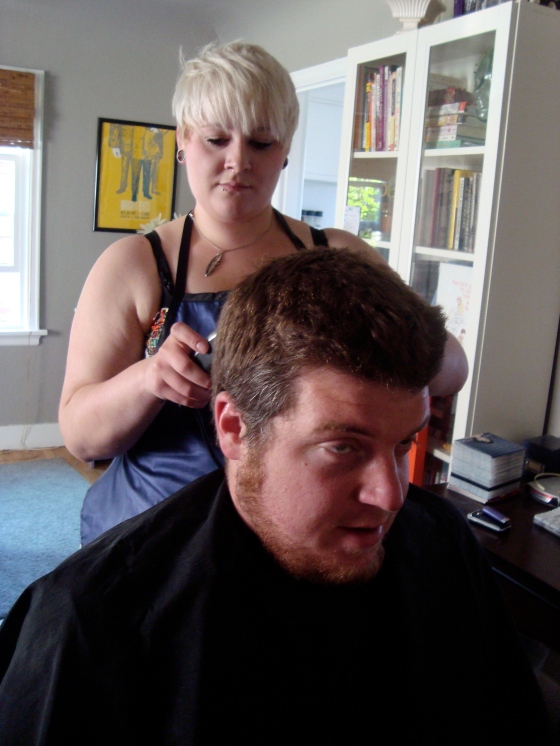 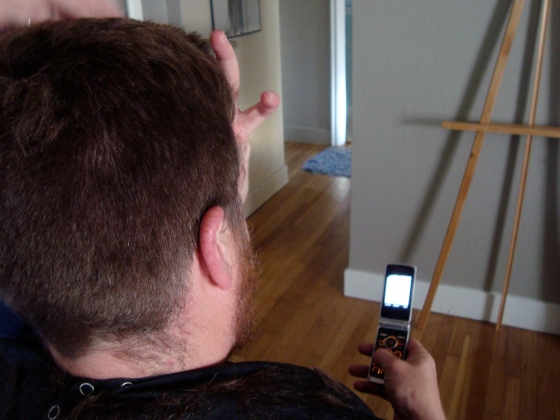 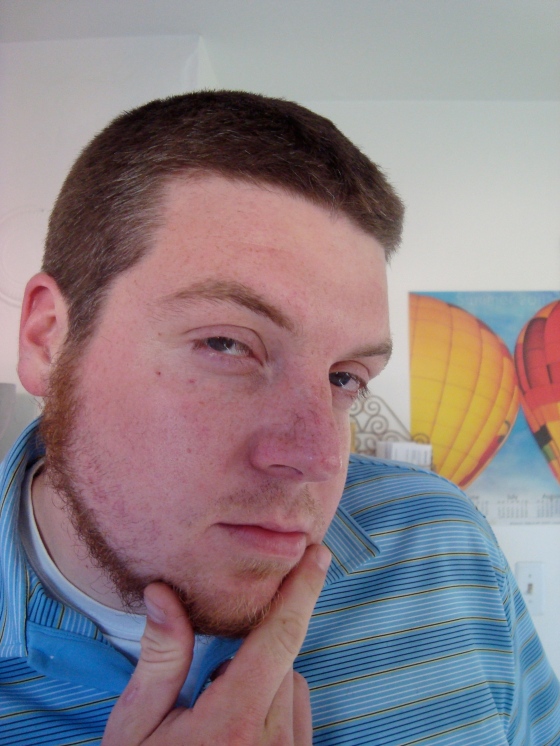 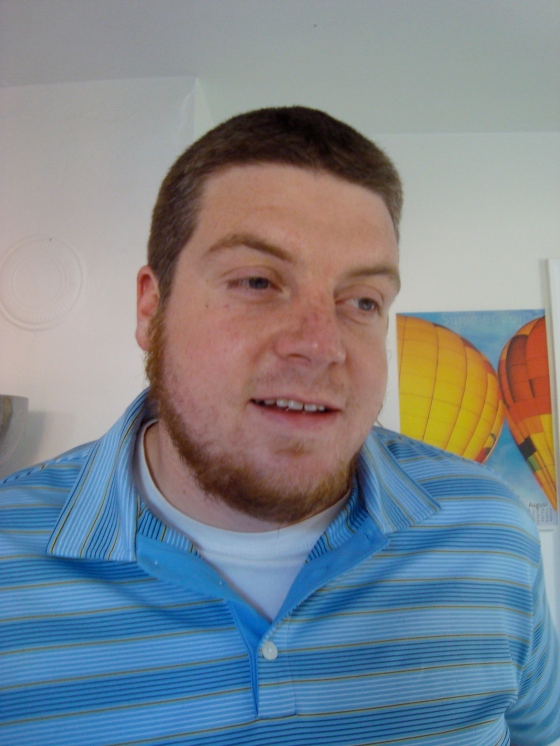 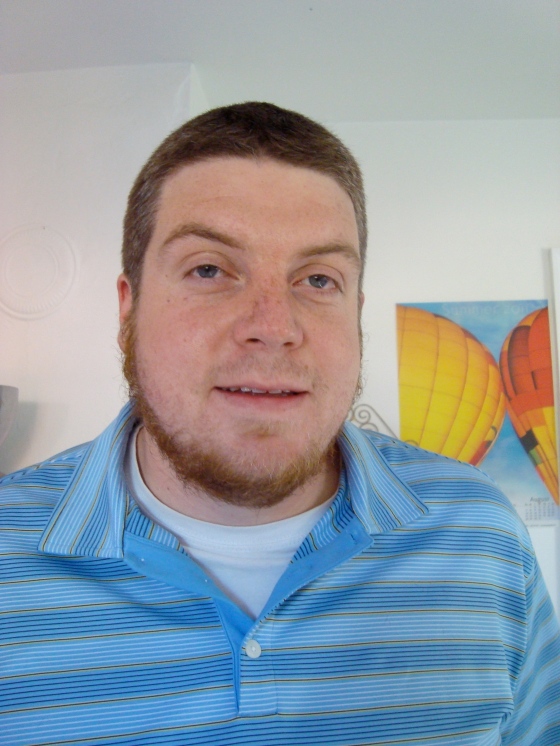 but this is a pretty good one.

In sad news two important people in Mr. Gaunts life passed away yesterday. His Grandma, and Nate Dogg. I’m sending sweet sweet thoughts to him tonight (as he does not yet know about Nate Dogg) here is his horoscope too:

It was sooo good to video chat with him tonight. xoxo my loves. 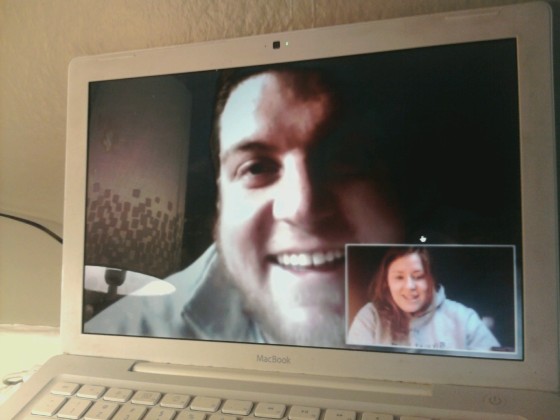 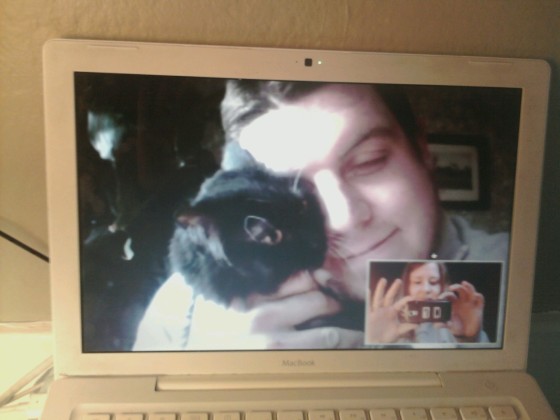 November 28th! Yay! Although I will say the 16 year old in me is SHOCKED Im dating a 30 year old…lol!

We had a nice dinner at The Old Spaghetti Factory with some close friends and family last Saturday. 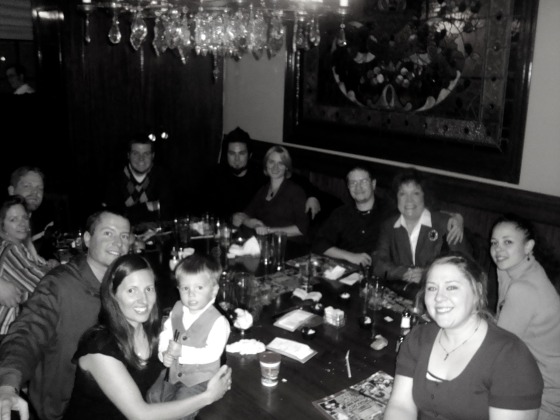 Self Portrait by Liam Heckmaster 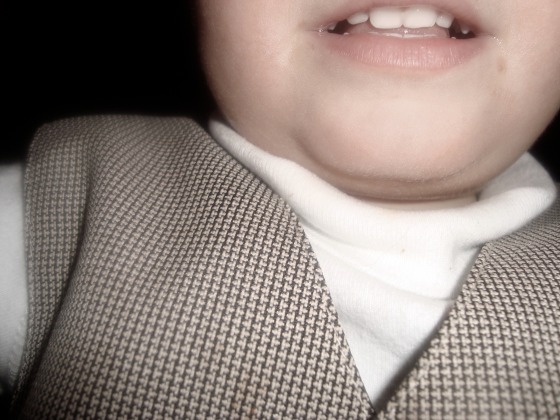 This boy needs a camera! 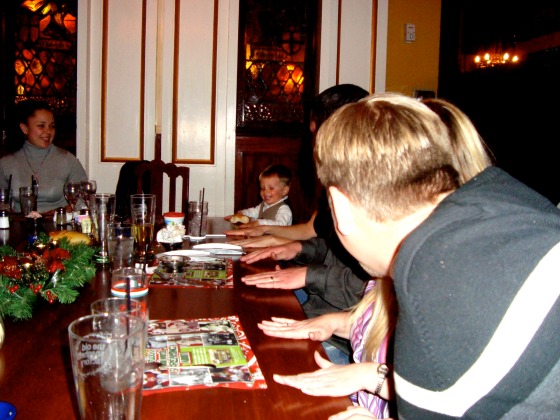 He made the entire table play "pound the table"

He might be 30, but this what what he really wanted 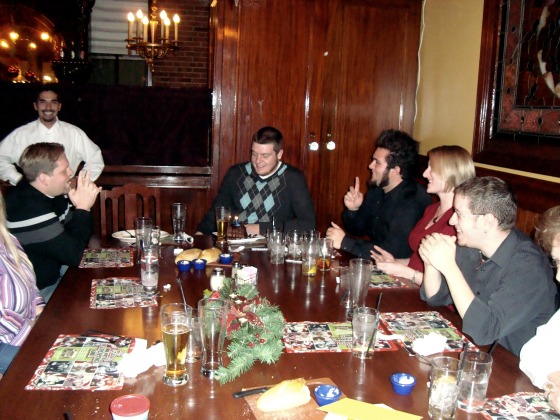 In all efforts Mr. Gaunt and I try to stay in love as much as possible. Dont get me wrong, there are days when we hate each others guts, but for the most part we try to live in love. Because I’m a floozy and I move in with boyfriends very quickly, Mr. Gaunt and I really never “dated” perse. I mean we would meet for lunch, and go out drinking with friends, but there was very little courting. He didn’t pick me up at my house and take me out to dinner or movies or anything like that. Most of the time I could care less about those kinds of things, but every now and then I think how much I would like to go on dates.

Mr. Gaunt is on an endless path to show me how much our relationship means to me (yes ladies be jealous…lol!) For real I often feel like he works 10x harder than I do, but I know that isn’t really true. We each have our own unique way of showing we care and putting effort in the relationship. For me its making good food and taking pictures of our family and all the little creative inspiration that keeps us entertained. I feel good about what I put into it too.

Anyway last Friday Mr. Gaunt decided we were going to go a date! Yipee! Originally he had planned for us to take Tango dancing lessons, but I sort of vetoed, Id rather do ballroom or salsa, tango seems too Adams Family. So instead we decided to do dinner and a walk through the park in Denver. We went to Pete’s Greek Restaurant, because I LOVE Greek food and Mr. Gaunt and I had never really been to real Greek food together. It was amazing, of course: 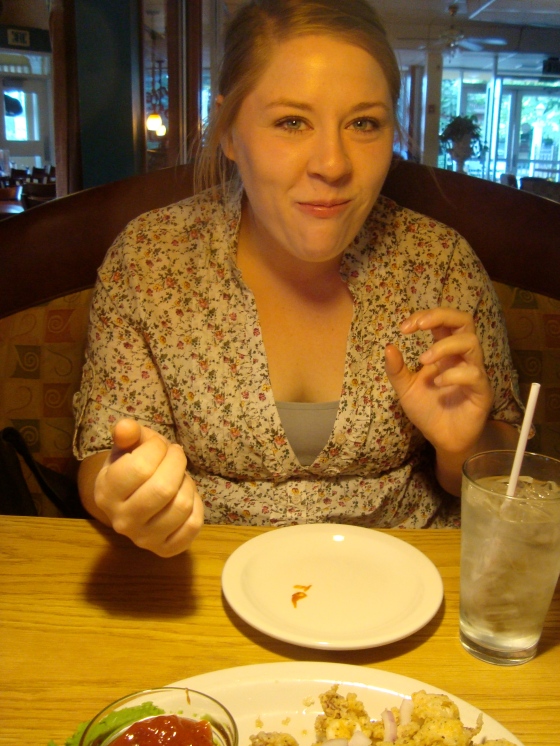 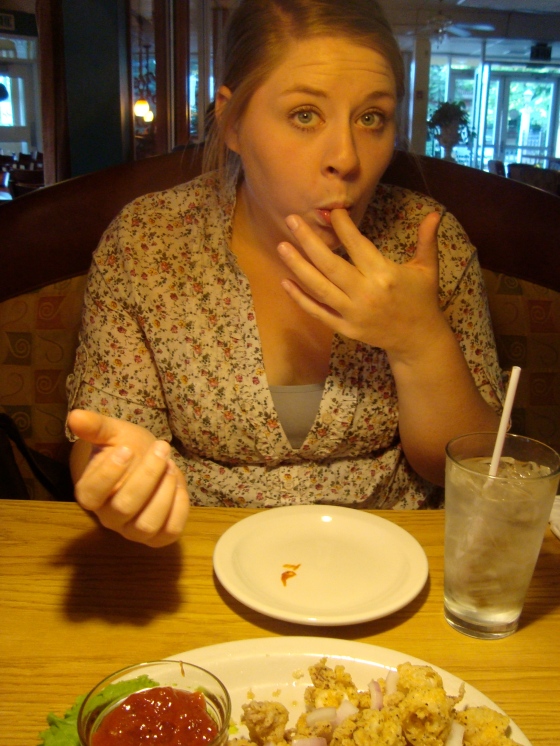 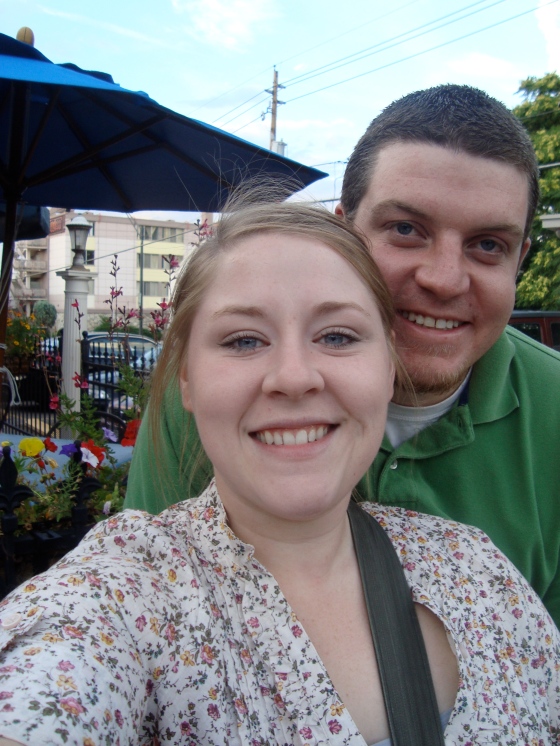 After that we went to City Park and watched the sun set and the fountains light up. We had wanted to go to the Botanical Gardens, but they were hosting some event that evening. The cutest part of the evening though was when we got to watch this guy propose to his girlfriend. I made a video, but I dont know how to upload it (MR. GAUNT HELP!) it was so stinking cute I cried…lol! Best date night EVER! 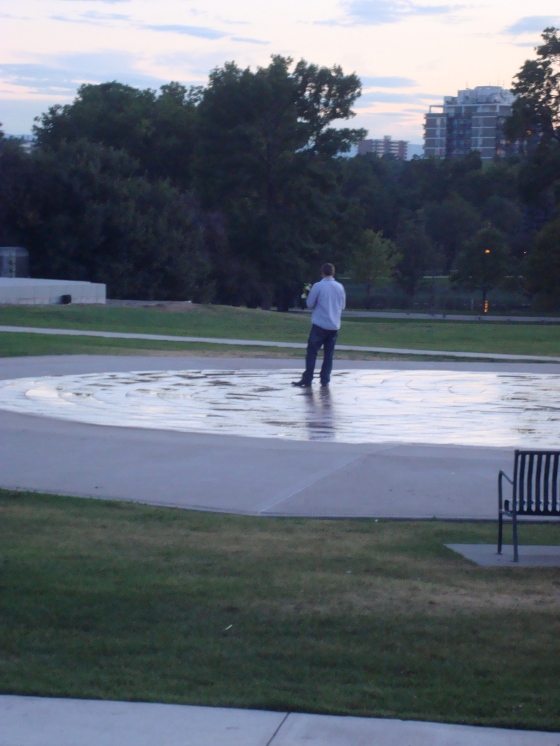 He was waiting forever for her to arrive.