My good friend Manda is the FIRST of all my close group of girlfriend to have a baby! We are all super excite, me especially. I may or may not be obsessed with babies (although please, for the love of god, don’t ask me if I’m pregnant! I SWEAR I will tell people if I am). Anyway, I would say it’s been a dream of mine to throw a baby shower, ever since… I was a baby. I freaking LOVE baby showers! Well, the games are sort of silly, but the food, decorations, and gifts are totes my thang!

Manda picked a date that worked for her, and we decided that a fall theme would work best as there is fall stuff everywhere, and it would be easy (not the I pick a party theme based on ease, but I really do like fall). I made the invitations in Photoshop (stealing images from all over the internet, but hey, it’s for personal use right?) I had them printed directly onto 5″ x 7″ photos at Costco. I uploaded them online and picked them up later that day. It cost me less than $10 to get about 30 printed. It’s the best way to go. (obviously I removed my email and my address, which is why the lettering looks like it is spaced weird) 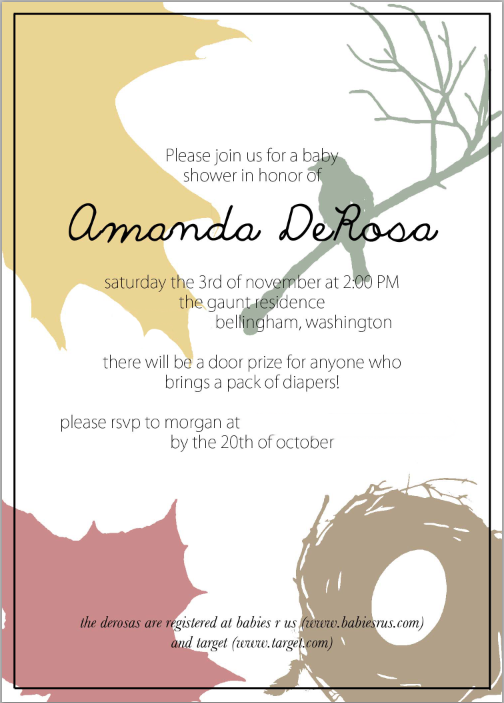 We decided to have the shower at my house, despite the fact that is quite small. We didn’t have any other great options except the clubhouse at Manda’s apartment, but we already did her Gender reveal party, and another friends bridal shower there, so I was OVER that venue.

The night before the shower, in order to accommodate about 20 people, Mr. Gaunt and I did a living room overhaul. We had talked about it, and even though it was a little extra work, I knew it would make a big difference to not have our large sectional in the middle of the living room. (you can see our living room set up here), and to move a few other pieces of furniture out. In the end we moved a bookcase, swapped a coffee table, removed the computer, TV, and a few larger accessories. Plus we put the couch in the corner, and brought in a banquet table, plus folding chairs and a bench. (and in case anyone wonders YES we will be moving it all back, it’s the way we like it) 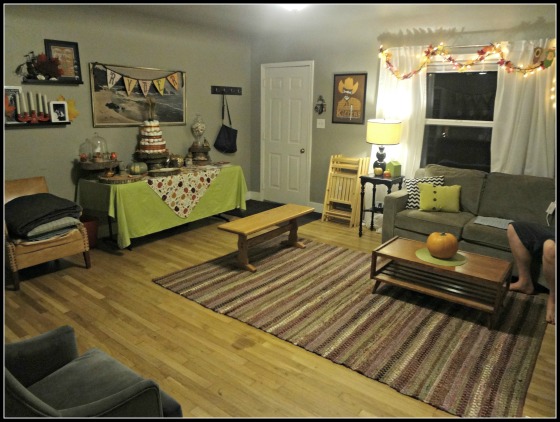 I already had a lot of fall decorations around my house, and I removed all the ones that seemed too Halloween-ie (including the front yard decor). Other than that, I brought in some supplies we rent out for our wedding business, like the big tree stumps, some cake stands, buffet supplies, and linens. Over the last month or so I also made bunting out of scrapbook paper that I machine sewed ribbon onto (that said BABY RYDER) and little fall colored onesie garland. Plus I made a few little signs, and bought a bag of fake leaves at Goodwill, and some fall florals to put in vases. Last I got Thanksgiving style plates and napkins on clearance. The rest of the decorations were merely things I had around the house that I compiled into the living room. Mr. Gaunt thought it may have been a little over decorated, to which I say “psshhh…never” 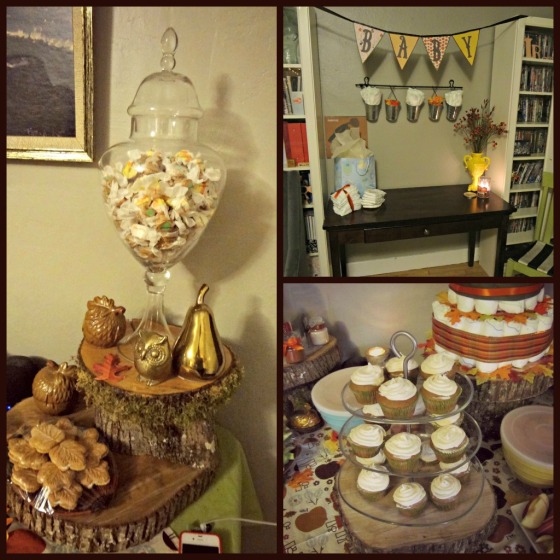 I set up the 8 ft banquet table with all the food on it, plus the Diaper Cake, which was request by the mama-to-be. I think she secretly wanted this one, but since it was my first diaper cake, I decided to stick to traditional with a fall theme. In the end I thought it turned out really cute! I basically followed this tutorial, but I didn’t do that weird inner-tube layer thing, I just cut holes in circles of cardboard and put the whole tube in it. Then I used more of my Goodwill leaves and some ribbon and fake florals to decorate it. The best part is there is no tape on the diapers (only clear rubber bands) so all the diapers can be used. Even my brother thought it was cool.

For food we went with a light lunch-snack deal. Pretty traditional items.

**And as take home favors I made onesie cut out Rice Krispie Treats with Royal Icing piping on them.

I also did a little bar area with red and white wine, a crockpot of hot chocolate, marshmallow vodka (for spiking) and bottled water. Plus I got sparkling cider for Manda, who did in fact approve having alcohol at her shower, because she is cool like that.

For games/activities we played the following:

–How Big Around is She?

For prizes we gave away $5 Starbucks Gift Cards with a little mini fall Jar candle tied with a bow. Who doesn’t want that?

After that we watched Manda open gifts, chatted with one anohter, Mandas mother-in-law got locked in my bathroom and I had to remove the doorknob, hugged kissed, and said goodbye! It was a pretty cute, stress free (minus the bathroom incident) baby shower, and I hope everyone had a good time! I forced everyone to take leftover treats home, although there are 5 cupcakes, I think I can hold out and send them to work with Mr. Gaunt on Monday! 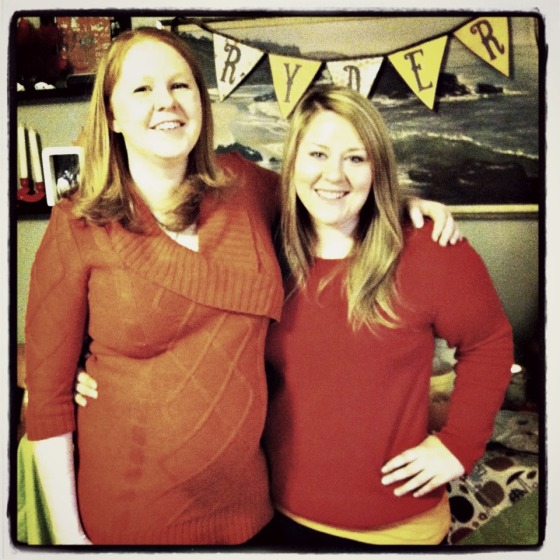 Love you LOTS and LOTS Manda! Can’t wait for baby Dancey (Ryder) to be out so we can play with him!!

PS: I missed ANOTHER weight watchers meeting, because my work schedule and other events did not allow me time to go! Grrr! But this next week I finally get to be the opener (from now on) at work, so I wont miss it this week! I should also be back to regular blogging.