Let me update you a bit on Mr. Gaunt (yes that’s his real last name, not a funny nickname like Slim Jim) weight loss. Well so far he has lost about 30+ pounds (I know how lame is that!?) the first 25 he lost in the first month or so. The guy is pretty big, 6’4″ weighing in at about 275 right now. I think his ideal weight is like 190-210 or something like that. So were thinking 225-245 would make him look stunning!  Mr. Gaunt gets 44 (Yes you read that right!) point a day! That’s like a whole nother meal and half than me. So he gets to do things like swing through Mcd’s in the morning for a sausage breakfast burrito. I do not encourage this behavior though, even if he does have the points, its total garbage he’s putting into his body first thing in the morning which is only setting him up to crave that kind of garbage the rest of the day. Usually 3-4 times a week I wake up at 5am and make him breakfast (he works at 6 I work at 7) but this week he worked further away so he had to leave the house at 5:30 and I haven’t slept well so Ive been sleeping right through our morning meal time. This somehow justifies that mcdonalds….not! Anyways Mr. Gaunt had plateaued at about 280 for the last 3 weeks or so so I gave him a goal of 178 by the end of the week. This morning he stepped on the scale and it read 275! YOU GO BABY! I’m super proud of him!

He really has been trying hard, this being the man who use to drink 2-4 20 oz MtDews a day and stop on the way home at BK for a WopperJr as “just  lil’ snacki” so he really is doing awesome. I’m just jealous that he sheds weight faster AND gets to eat more…ha! Anyways I thought I would show you pics of his progress so far (mine will be coming when I hit my 30lb loss too dont you worry) 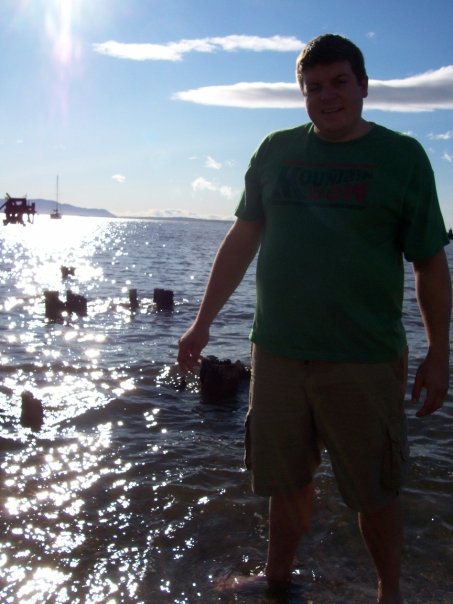 BEFORE (sorry so dark)

Before (with my momma)